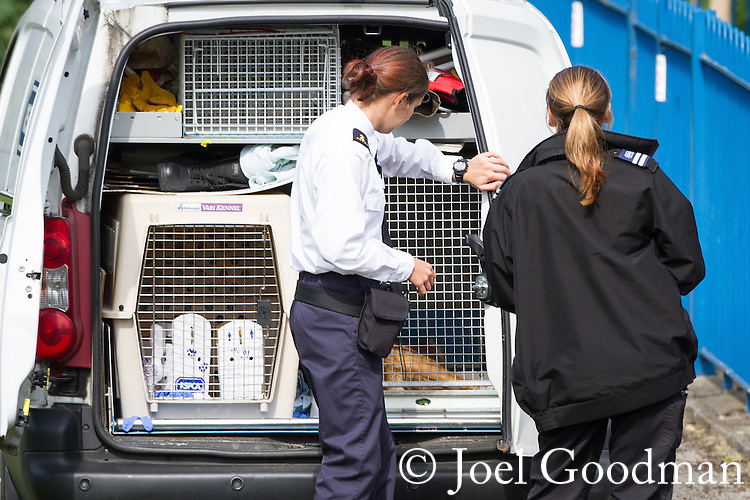 © Joel Goodman - 07973 332324 . Stockport , UK . RSPCA animal welfare officer Helen Chapman (right) and Inspector Gilly Howard (left) close the doors of the van after the animal was shot with a tranquiliser dart . A wild deer which was discovered in a park by the busy Manchester Road in Stockport has been rescued after three days . The park was closed and locked by Stockport Council officials on Monday 24th June after the young male started bolting across the playing field and playground and butting its head and antlers against railings . But with the gates locked , the young animal could not escape . For three days local people came out to watch the deer from the fence as it hid in bushes around the edge of the park , occasionally venturing out across the playing pitch and in the direction of the busy A626 road . The landlord at " The Hind's Head " pub opposite , Stuart Kirkham , a Manchester United fan , named the beast " Ronaldo " because of its red colouring . After three days , with no hope of escape under its own steam and with the park still closed , the RSPCA and council brought in a veterinary surgeon to help . The animal was tranquilised and driven to nearby Reddish Vale Country Park , where he was brought round and released back in to the wild . Photo credit : Joel Goodman
SEARCH RESULTS